Skip to content
You are here
Home > DFS News >
0

NFL is back fantasy champions! So we need to breakdown the top quarterbacks in the NFL and give my projections. I’ve won 3 out of the past 5 years in traditional fantasy football leagues and I believe it is because I see what most fantasy grinders do not. So without further ado, my top five quarterbacks. 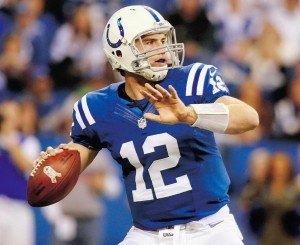 Its not all luck! Number 12 for the Colts has the skills that kill. He shredded NFL defenses last season, posting outstanding numbers consisting of a 40 TDs and 16 INTs. He threw for 4,761 and rushed for 273 yards, adding 3 more rushing TDs to his total. Luck and the Colts  aim to expand on these numbers with key additions of Andre Johnson and Frank Gore.

Andre Johnson has had some mediocre seasons over the past couple years, relying on Matt Schaub and Case Keenum. Having a top tier QB could send Johnson to the fountain of youth. Couple that with a ground attack, and you have yourself an MVP QB! Frank Gore will help keep defenses honest with his ability to get tough yards, as well is spring a long run. With all these additions and the weaker schedule that the Colts play, I believe Andrew Luck is this years #1 fantasy football quarterback. 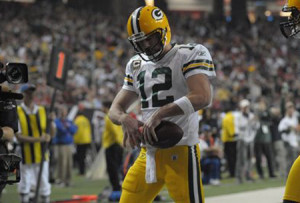 Rodgers can easily be seen as a consensus #1 NFL QB and probably is in most fantasy football leagues. Like Luck, Rodgers is a menace with his legs and his arm. His ability to extend the play and hit Jordy Nelson or Randall Cobb, and have them turn a 10-yd play into a 40-yd TD, makes him an elite NFL QB. The fact that he and the Packers play in traditionally rougher weather during November, is why I place him just below Luck this year. You have to love Rodgers 38 TDs to his 5 INTs last season. His 4,381 passing yards were complemented by his 269 rushing yards. With Eddie Lacy progressing each year, Rodgers looks to lead a well-ballanced Pack Attack. 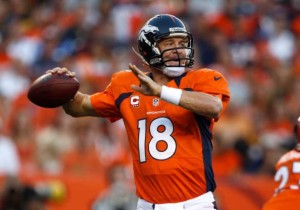 Peyton still has the ability to spread defenses up. He gets to play Oakland, San Diego and Kansas City twice again this year. Those three teams had three of the NFL’s worst defenses. Peyton will lose a huge target in Julius Thomas, but will hope to replace him with Owen Daniels. Don’t count on Daniels to replace the 12 TD’s of Thomas, but will complement the Broncos passing attack well. Older brother threw for 4,727 yards, with 39 TDs, 15 INTs last season. Though he lost one of the best Tight Ends in the game, he still has a tremendous receiving corps consisting of D. Thomas and E. Sanders, who combined for 19 TDs. 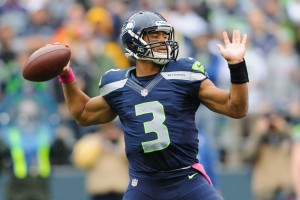 After the worst pass in his life, Wilson is poised to deliver on another monster fantasy football year. Russell is truly a multidimensional player throwing for 20 TDs, 3,475 and rushing for 849 with 6 TDs. All he gained was Jimmy Graham in the offseason to help expanding on his passing numbers. Naturally his rushing numbers will increase as well, as linebackers will cover Graham, opening the middle or flats up. 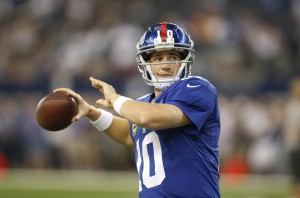 Little brother is primed for one of his biggest passing years this season. With having OBJ for another 4 additional games this year, along with a healthy Victor Cruz, and Eli will have no problem throwing for 4,000 yards. He has that interception problem, though they’re not all his fault, but that should reduce substantially with the addition of Shane Vereen. Last season Eli threw for 4,410 yards, with 30 TDs and 14 INTs.

Thanks for following! Email to get more content, or consult with TWW for 1-on-1 expert analysis of your fantasy football draft.