Skip to content
You are here
Home > Draft Kings > 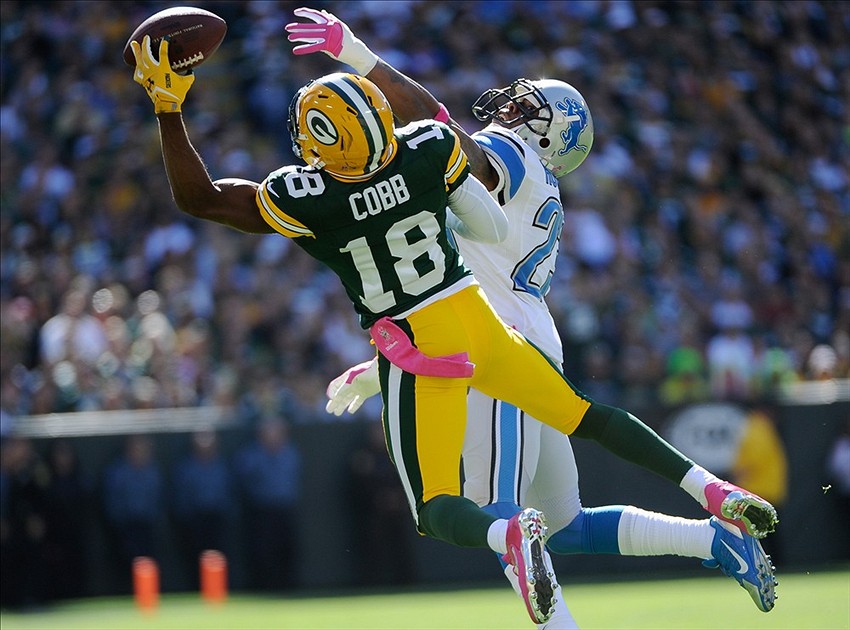 It’s time for another Sweet Fantasy. We’re gonna get kinky today and talk about handcuffs but probably not the kind you think. If you’ve played Fantasy Football for a number of years you are probably familiar with the concept of handcuffing your stud Running Backs, late in your draft or auction you grab your starters backup with a relatively unimportant pick. You don’t want to risk a fellow owner grabbing Knile Davis from you when you own Jamaal Charles and he goes down in Week 1 for a few weeks or more. But here’s where real football has forced us to ponder a different handcuff strategy…Wide Receiver handcuffs. The reality is teams are passing at historic rates and there are just more Wide Receivers scoring big fantasy points than ever before.  Wide Receiver handcuffs can be just as valuable if not more than the Running Back handcuffs. You don’t need the top guy to get hurt for a Wide Receiver handcuff to pay off, a number two receiver can end up getting big targets as well, just ask Randall Cobb or Emmanuel Sanders or that “gym rat” Wes Welker. So here are some situations to monitor and guys for you to target late in drafts.

No team gets more immediate contribution out of pass catchers than the Packers with Aaron Rodgers throwing the ball around. Anyone that has picked up Jarrett Boykin or Davante Adams for a week when someone was injured knows that. Davante Adams would have been a great target before the terrible Jordy Nelson news but he’s going to be drafted as a Top 20 Wide Receiver going forward. The top guy I’m targeting here is rookie Ty Montgomery who has been tearing it up in camp for the Cheese Heads. He could be the 3rd WR and have some value on his own but if Cobb has a flare up he could be an every week starter. The same goes for Jeff Janis who is a real deep threat.

The days of Julio Jones and Roddy White being a top ten Wide Receiver duo may be over but Julio is still smoking and a lot of people are expecting his best year of his career in 2015. Roddy is not his former self but he may not be all the way done yet, he also may not play 16 games. In the past the easy fill in guy was Harry Douglas who had some legitimate big weeks a few years ago when both guys were out but he is now in Tennessee. That leaves us Free Agent pickup Leonard Hankerson, he should play plenty even when Roddy is healthy but if either guy goes down he will become a hot pickup on the waiver wire, that is unless you already rostered him late in your draft.

You probably already noticed that the Saints lost a lot of catches from last year with the departures of Jimmy Graham and Kenny Stills. Brandin Cooks is expected to get a lot of targets and Colston is still there but someone needs to help pick up the slack especially if Colston misses any time this year. The two guys to target are Brandon Coleman who some say is a younger Colston and Nick Toon. As long as Drew Brees is the QB there are going to be catches to be had.

Everyone remembers the Peyton Manning days when the next guy up was a waiver wire wonder, Austin Collie, Blair White anyone? A young Pierre Garcon. Well the QB has changed but the elite passing game hasn’t. TY Hilton and aging Andre Johnson are the clear starters but if age or injuries should bother Andre look for rookie Philip Dorsett and sophomore Donte Moncrief to come in to immediate success. The Colts drafted Dorsett high for a reason but even though they re-signed Hilton it will still benefit them to give him some reps.

The Broncos during Peyton Manning’s time there have facilitated record breaking receiving numbers for his targets. Emmanuel Sanders never really broke out in Pittsburgh but had a career year with the Broncos in 2014. He is not starting the 2015 season off at 100% health though so Cody Latimer could be a great handcuff and should see plenty of playing time without a Sanders injury. With Welker and Julius Thomas gone there are targets to be had.

The Titans don’t really stack up with the other teams on this list as far as passing games go but they have a few older guys near the top of the depth chart. Kendall Wright is the WR1 here and while he won’t knock your socks off he is at least a reliable guy to stick in your lineup most weeks. Behind him we find two guys who’s best days are probably far behind them in Hakeem Nicks and Harry Douglas. Justin Hunter should be higher up than he is but he may have soe legal issues to answer to, that’s where another guy with a shaky past comes in…Rookie Dorial Green-Beckham. Green-Beckham has plenty of talent and should Nicks or Douglas falter look for Green-Beckham to take advantage and keep the job.

This should get you started so go home, get out your laptop, turn the lights off and start handcuffing guys and gals. As always I’m your Sweet Fantasy.