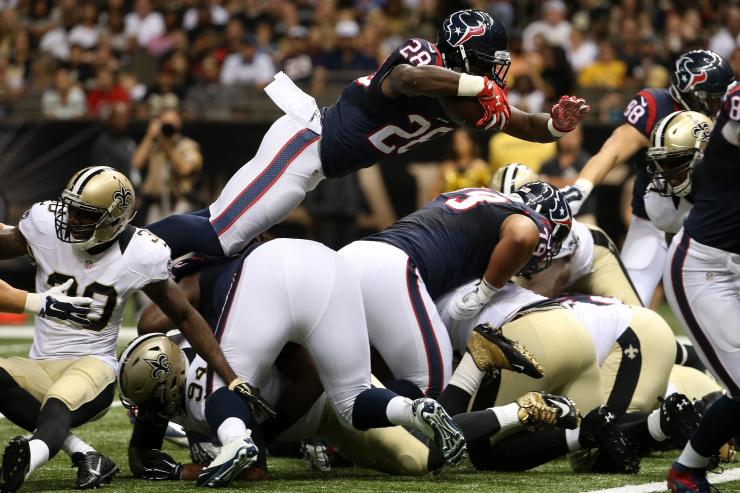 Well Sweet Fantasy Followers,  Thanksgiving has come and gone, hopefully everyone added some winnings to their expanding waistlines this Holiday and was able to enjoy Black Friday. But this week is far from over and there are a ton of great plays out there this week with so many starting Running Backs out for the year and with the bye weeks over. The last two weeks have been very low scoring and I expect that trend to flip on it’s head this week. I’m expecting some of the higher cash lines of the year so try to make the most out of every pick this week. Don’t forget to enter the 15K Freeroll at the bottom for DraftKings. On to the Week 12 values!

Play the match ups. That’s what you are doing with this pick. Before the Eagles started giving up 5 TDs to every QB the defense to target was the Saints. Brian Hoyer gets first crack at them this week without Rob Ryan but I don’t think firing an overrated coordinator is gonna fix all of their problems. The easiest pick on the board this week is Nuke Hopkins so go ahead and stack him for the ever low price and then slot in another stud like OBJ or Antonio Brown next to him. Hoyer is a nice gpp play but I wouldn’t be surprised to see him owned at a decent rate in cash games too.

Baltimore fans I’m not picking on you. I’m really not. And I’ve been wrong on the last few QBs I’ve picked to go against the Ravens. I really like this pick though as a sneaky gpp play this week. Johnathan Football went to a bar on his bye week and lied to his coaches about it so luckily for Gary Barnidge and Fantasy owners we get McCown back in the mix. Oh I’m burying the lead, back in Week 5 McCown threw for 457 yards at Baltimore so that tells me he should be able to have some success this week. Plus this week you really need a reason to watch MNF so grab McCown and a TE or WR and maybe a RB from the other team.

The Raiders are good again! The Raiders are bad again! Nobody really knows who’s good or bad this year but it appears the Raiders have come back to earth after getting wins against 3 of the worst teams in football and the Jets. This is a very nice spot for Number 2 draft pick Marcus Mariota to have another signature game. He should get Kendall Wright back this week so a stack with him or Delanie Walker would be a nice contrarian play to everyone playing Hoyer or Cousins this week.

If you decide not to get a piece of the Texans pass game then think about Alfred Blue at New Orleans. While he’s clearly not a special back he has been getting the volume and had a productive day against the Jets tough Run defense last week. The Saints are allowing fantasy points everywhere as they are giving the third most fantasy points to opposing Running Backs. I really like this play for cash games and gpp this week.

While Alfred Blue isn’t a special back it appears that Thomas Rawls may be. Even without his performance against a bad 49ers team last week he already had a couple of 100 yard games earlier in the year and one of them came at the Cincinnati Bengals which should be a good comp for this weeks opponent. The Steelers are good against the run but I feel the Seahawks will need to establish the run game here and not let the high powered Steelers offense get going. Rawls is a good bet for cash games this week.

The Ravens have been absolutely decimated by injuries this year and will now turn to Matt Schaub at QB and Buck Allen at RB the rest of the way. The things we’ve seen from Schaub the past several years don’t indicate a high powered Ravens passing attack is on the way so I really like Allen in this spot. He is going to be a 3 down back it appears and at this price against this opponent it may be too good to pass up. Buck also had 5 catched last week so he could really return some great value for you on MNF. Like I mentioned earlier you aren’t watching the game on Monday unless you have some action in it.

You remember this guy right? For years he has been the poster child for the hit or miss Wide Receiver alternating weeks of 3 points with 25 points. Now that Mike Evans is the Number 1 target he has been forgotten about by most of us and that could be a good thing in Week 12. The Tampa Bay passing offense has a real nice match up against the Colts and now that Mike Evans is the alpha dog there he should see the Vontae Davis treatment leaving plenty of targets for Vincent Jackson. Jackson played on 61 snaps last week after coming back from his knee injury and should be even better this week. This is a guy that should be pretty low owned too so grab him for your big tournaments.

So I mentioned Thomas Rawls above and said the Seahwawks will try to establish a run game. Here’s the option if that doesn’t play out. The Seahawks pass offense has been very hit and miss this year but mostly miss. For whatever reason they traded for the best pass catching Tight End in football so he could block all game. They do have something here in Tyler Lockett if they choose to realize he should be seeing a few more chances a game. He had his best game through the air last week with 4 for 48 and 2 TDs. The Steelers pass D is very shaky and I could see a long TD from Lockett on Sunday. Throw in the added bonus on DraftKings that he gets points for return TDs and he’s a sneaky gpp play. 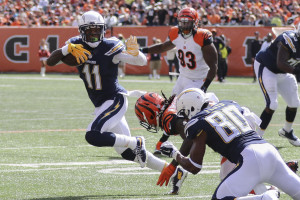 Another week another Stevie Johnson pick. He may have appeared in my values column more than anyone and they haven’t all hit but I think this is a great week to play him. I also really like his QB this week as nobody is going to want to roster Philip Rivers after he got hit for 4 quarters and threw up 6 points last week. This is a good match up for the Chargers pass game and I think this could be a 2 TD game for Johnson. Malcom Floyd returns and I think that only helps Stevie.

Most of the Tight Ends I like this week are towards the top of the pricelist as I love Delanie Walker, Jordan Reed, and Gary Barnkowski this week. But a little further down the list I love Heath Miller at $3,000 on DK as the Seahawks have had a world of problems containing the Tight End this year. Other guys to take a flyer on are Jacob Tamme and Vernon Davis.

That does it for my value picks this week, don’t forget to enter the 15K Freeroll below. As always I’m your Sweet Fantasy.

Don’t forget to check out our newest affiliate Draftpot. It’s a whole different type of DFS game with no salaries. These guys put out a really nice product.