Fantasy sports and dating have many similarities in the emotional way. Some participants fall in love with a player and will stick with him through disappointment after disappointment. Unknown beauties discovered in far-reaching areas are paraded through every bar discussion and lauded at each opportunity. Ultimately, the goal is to build a harem of talent around you that will cover every statistical whim that makes up Scoring.

An additional characteristic of the fantasy sports player and dating is the desired duration of a coupling. That scale has been sliding far more into the world of One-night stands in the past five years. For decades, many players had preferred a longer-term relationship; one that allowed the player to grow to love his union and to look forward to each and every performance with great anticipation. No longer. The norm now is the wham-bam approach of one-and-done. Hit it and get out! The daily date is over and there is the door! The problem with that approach is that it is too calculated and callous for some. There are those who want some sort of an emotional connection without the long-reaching constraints of a full dating season. It allows the player to cuddle, to spoon, but to do it without long-term expectations. 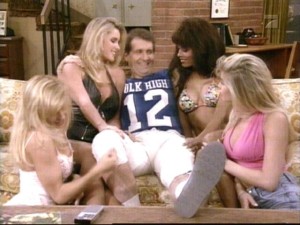 So, as you have seen pitched on national TV every five minutes, Daily Fantasy Sports are your one-night stands over your traditional season-long fantasy sports. Why is there no middle ground in fantasy sports? Well, Maximum Fantasy Sports offers that middle ground via Monthly Fantasy Leagues, also known as 4-Week Frenzy leagues. These are Total Points leagues that run for 4 weeks in the season. These are a perfect middle ground for those wanting the warmth of a relationship but the ability to dance with different partners multiple times throughout the season.

One drawback to this approach is that the NFL Bye Week season runs for almost two-thirds of the season so it is hard to build a team. Not at Maximum Fantasy Sports! MFS has a feature known as Bye Week Rollover. Managers can choose to use the week prior to a Bye Week as the player’s performance during the Bye Week. There is one catch though; this decision needs to be made before the game starts in the week prior. For example, Team A has QB Matt Ryan facing the 49ers in Week 9 and Ryan has a Bye Week in Week 10. If the manager selects the checkbox to “roll over” Ryan’s points to his Week 10 Bye Week prior to the Week 9 game starting, Ryan’s Week 9 points will be locked in for Week 10 as well. So, you get a 2-for-1 performance, which is really nice in the dating world. Now, there is no guarantee that Ryan will outperform any other QB on the roster that could be started in Week 10 and, if he gets hurt or has a bad game, you cannot change the fact that Ryan’s points are already locked in for Week 10. In a matchup like Ryan’s; facing the 49ers’ defense, one would think that this is a worthwhile risk. On the flip side, 49er QB Colin Kaepernick is on the same Bye schedule but I would not recommend starting him, let along starting him in Week 9 and rolling his Week 9 performance over to Week 10.

MFS has 4-week Frenzy leagues open for Week 9 that run through Week 12, which come in the Draft and Non-draft variety. This gives you a chance to draft your team and be the only person holding a player in that league or, if you cannot make a draft Wednesday night, you can still participate and populate your team from the full Player list. Of course, other teams in the league have the chance to stock any of the players that you chose as well, which is not as fun. Each type of league comes with its own strategies for how to populate and manage your starting roster. Are you up for the challenge? If so, sign up for one of these leagues now on their Open Leagues page.