This Lineup was created on FanDuel using a $35,000 cap. Use this advice or compete against us on FanDuel! 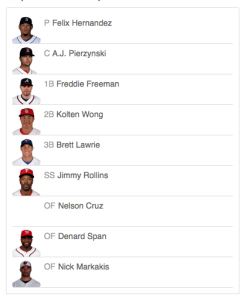 Welcome back fantasy champions! We are playing the evening lineup tonight. Just wanted to take a moment to express how happy I am to see baseball back in Baltimore. It is one step closer to restoring order. Here is what you should consider tonight…

C – Pierzynski: A.J. was perfect last night and continues to pound the ball hitting .439. He is priced at $2,600, leaving you plenty of room to play in your budget.

1B – Freeman: Lets stay with Braves here as Freddy cant seem to find an out lately. He’s going for $3,200 and is hitting in “Hotlanta” lineup.

2B – Wong: Kolten got busy last night again. He has reached base safely the past four nights but he was left on base 3 times in last night’s game. He’s worth the $2,700 price tag.

3B – Lawrie: The A’s seem to score runs in waves and then go on scoring droughts. After last night’s show, I think the A’s are about to erupt. Lawrie should grab you 3 points. Grab him for $2,300

SS – Rollins: JRoll hasn’t been getting it done at the plate like he used to. He bats leadoff in a powerful lineup and is a steal priced at $2,700. After dealing with the MadBum in last night’s game, he should handle Vogelsong well tonight.

OF – Markakis $2,900 On one of the Orioles’ promo night last season, they gave out shirts featuring a Nick Markakis. It was theme was “Mr. Consistency. That’s what Nick is! Leading off for the Braves, he gets you the opportunity to collect points.

OF – Span $2,600 This dude was a monster last night in that wild, high-scoring game. He didn’t have that much of a spring. It looks like the kinks are working their way out. He’s worth a look tonight for his price.

OF – Cruz Nelly had a double and a triple last night. He’s due for another big night in Arlington. Nelly will cost you $4,900 for his contributions tonight.

If you want personalized advice you can find me on Twitter @TheWagnerWire.. Enjoy!